The coat of arms for the town of Ustka has a crowned mermaid holding a salmon in her hand.

This statue of the mermaid was created in bronze by Jerzy Michał Rosa and unveiled in 2010 on a marble pedestal on the pier in the harbor, positioned to greet ships as they come in. map

The mermaid is clearly part of the town’s history. Ustka is a summer tourist bathing town and the mermaid statue was part of renovations designed to attract even more visitors. 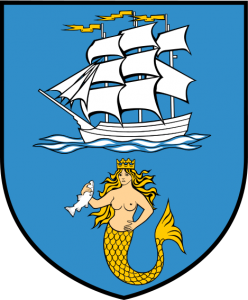 The legend is of a mermaid of pure heart named Bryzga Rosowa who took pity on a blind widow in Ustka whose son had not returned from sea. Every day the mermaid brought the widow salmon, until one day her vision returned and she was able to see her son finally returning home on an arriving ship.

A live video feed shows the mermaid and visitors at www.syrenka.ustka.pl

See the full page for this mermaid statue here.